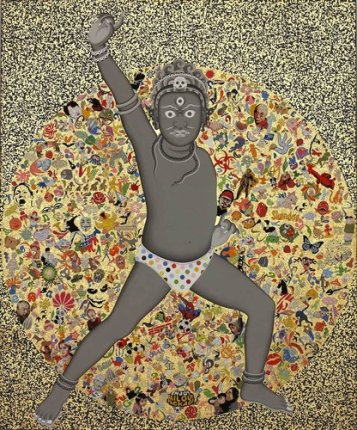 Post = after in time or sequence; following; subsequent
Traditional = 1. of or pertaining to tradition. 2. handed down by tradition. 3. in accordance with tradition.
Buddhism = 1. a religion represented by the many groups (especially in Asia) that profess various forms of the Buddhist doctrine and that venerate Buddha. 2. a religion that originally comes from South Asia, and teaches that personal spiritual improvement will lead to escape from human suffering.

What is a Post-Traditional approach to Buddhism?
I first came across the notion of post-traditional Buddhism in a blog post by Hokai Sobol, a Croatian Shingon teacher who’s been involved with the Buddhist Geeks since its inception, whilst exploring the intersection of Vajrayana Buddhism and Western culture in his own practice and teaching. He wrote in 2011:

“…While post-traditional in the strict sense means evolving Buddhism beyond ethnocentric identities, parochial attitudes, and ideologically-based loyalties, in the broad sense it means also being alert to modern and ‘postmodern’ reactivity when it comes to spiritual principles of authority, verticality, and devotion. In short, it’s a challenging leap with implications for spiritual practice, critical studies, communal discourse, institutional reform, and political culture. Insofar as these spheres are interdependent and mutually inclusive, the actual shift to post-traditional can only really take place as a comprehensive strategic endeavour, bringing together the best of premodern, modern, and ‘postmodern’ contributions, while making sure the core principles of the Buddhist path are reasserted effectively and compellingly.” Hokai Sobol

As he indicates, approaching Buddhism post-traditionally entails leaving behind faithful continuity with tradition, or at least its forms. This implies freedom from the need to replicate a specific ideal of Buddhism as it has been received or sanctified. The extent of departure from tradition will vary according to the extent of disillusionment with tradition that a person has experienced and the personal connection they have to that tradition. Hokai continues with Shingon for his own reasons whilst others leave all forms of Buddhism behind.
A post-traditional approach entails a particular form of freedom when examining Buddhist materials, including teachings, beliefs, symbols, moral behavioural guidelines, key claims and ultimate truth, without having to adopt a Buddhist identity, internalize Buddhist beliefs, and/or be blinded by a tradition’s particular formulation of Buddhism at a personal, social, and cultural level.
A post-traditional approach signifies a desire to unpack, deconstruct and evaluate elements of Buddhism as phenomena rather than as formulations of revealed and ultimate truths. It means being critical and placing Buddhism alongside other sources of human history, human knowing, human understanding and praxis, to test claims and experiment. In this sense, the way I conceive of post-traditional Buddhism has much in common with non-Buddhism which further moves away from Buddhism as a fountain of truth:

“Non-Buddhism is acutely interested in the uses of Buddhist teachings, but in a way that remains unbeholden to–and hence, unbound by and unaccountable to–the very norms that govern those teachings. Once we have suspended the structures that constitute “Buddhism,” once we have muted what to the believer is Buddhism’s very vibrato, we are free to hear fresh resonances.” Glenn Wallis

A post-traditional approach means holding Buddhism up to greater scrutiny and suspending reverence, carried out with an expanding array of intellectual and critical skills. It means levelling the playing field, and stripping Buddhism of its special categories. It means seeing it, in its great diversity, as thoroughly human phenomena.
This approach to Buddhism is obviously different from that taken by the large numbers of Westerners looking for a religious alternative to Christianity, Judaism and atheism, or the spiritual but not religious crowd looking to restore some sense of meaning to their lives. Those engaged in a post-traditional relationship with Buddhism will most likely be long-term practitioners who have ceased to be enamoured with Buddhism’s exotic symbology, or disappointed by their lack of progress in practice. It is an approach often more resonant with the work of philosophers and Buddhologists studying Buddhism from the outside than those who self-identify as Buddhist.
If it is not obvious already, you may be asking yourself, “Why should I be interested or in need of such an approach?” A number of concepts elaborated by Glenn Wallis might be useful for understanding who specifically would be motivated by such an approach. For those who know of Glenn Wallis and his work, he is considered controversial for his attacks on the failings of contemporary Buddhists to take their Buddhist claims seriously and for their appeasement of global capitalism and injustice. Whatever one might make of his approach at the Speculative Non-Buddhism site, his work and writings are of immense value to anybody interested in deconstructing Buddhism. His original work of the same name is a treasure trove for those intellectually dissatisfied with Buddhism and already in the advance stages of a relational break with the Buddha’s offspring.
Those who become deluded with Buddhism may find themselves increasingly in a state of what Wallis defines as ‘aporetic dissonance’:

“Aporetic Dissonance: An affective condition. The believer‘s discovery within himself or herself of a dissonant ring of perplexity, puzzlement, confusion, and loss concerning the integrity of Buddhism‘s self-presentation. It involves an apprehension that buddhistic rhetorics of self-display are but instances of acataleptic impassability. This ring is the signal for aporetic inquiry.” From, Nascent Speculative Non-Buddhism

The language Wallis uses can be challenging but, basically, he means a person starts to feel a form of dissonance, discomfort or dissatisfaction towards their tradition or Buddhism in general. Something starts to feel off and ideas that were once palpable seem to be incoherent, false or even make believe. Practices that produced positive feelings start to produce indifference or even discomfort. There is a process of separation between one’s own sense of integrity and the Buddhist ideas or practices being engaged with and the romance begins to fade, leading to:

“Ancoric loss. An affective condition. The irreversible termination of hope that ―Buddhism indexes the thaumaturgical refuge adduced in its rhetorics of selfdisplay.” From, Nascent Speculative Non-Buddhism

Meaning that a person loses their blind faith in Buddhism and is no longer able to buy into the idea it will save them in spite of its claims to the contrary.
We can draw from this that a person needs to have had some degree of meaningful engagement with Buddhism before a post-traditional approach starts to make sense. Differently to Wallis’ own progress and increasing break from Buddhism over the years to an elaboration of the philosophically inspired non-Buddhism, a post-traditional approach desires to find a sober basis for re-engagement with Buddhism as a depositary of potential: in my own case, in its meditation practices and first person accounts of meditational development. The formulation of such re-engagement is not monolithic and does not need to lead to the revival of Buddhism, though for some it may. By its very nature, post-traditional implies a break from whatever tradition was followed beforehand and an initial unwillingness to go through another disappointing relationship with yet another Buddhist ‘partner’. One may feel a desire to be pragmatic, to meditate still, to continue to find value in some of the Buddhist teachings which still resonate.
Ancoric loss then signals either a total break from Buddhism, relatively common even at the early stages in a relationship with Buddhism for those who are after more than a new religious identity, or a need for the formulation of a human theory of liberation in line with developments in western thought and understanding. This means abandoning the guarantees of historical Buddhism as a source of refuge for a less predictable engagement with the tenets of liberation, interdependence, decay and birth, an ethical life and the pragmatics of mind-training through one’s own efforts and inquiry.
Such approaches are still in their infancy and primarily carried out by individuals and sporadic small groups. There are already a number of Western Buddhisms, although as far as I can tell, most are romantically saturated with their Eastern precedents. In my mind, a truly Western Buddhism would be almost unrecognisable from all forms of Eastern Buddhism. In line with Buddhism, it would provide radical means for discovering the lack of a solid atomised self, help us to be experientially cognizant of the interwoven nature of being, come to accept our finite existence and inevitable death, provide means for developing empathic opening to other, and stimulate a profound engagement and commitment to the world as it is along with the courage to engage with its most pressing needs, ultimately leading to a commitment to caring for streams of mutual becoming and flourishing that reduce ignorance and suffering in the world.
The sciences have so far taken the lead in opening up Buddhism and mindfulness meditation to a wider public. Mindfulness is still ‘hot at the moment’ and the subject of many ongoing studies. Whether such interest will be temporary is unknown. In any case, the humanities provide better sources of conceptual tools, language and ideas as far as giving rise to a transformation of Buddhism and its tenets into a viable contemporary form of liberation practice. The sciences are unable to understand what consciousness is, let alone provide a significant understanding of the positive emotional states such as compassion, empathy and love. This is not to dismiss the value of research being carried out and the commitment of a number of scientists to studying the brain, but rather a recognition that Buddhism is not only meditation, it is also social practice, political engagement/disengagement, ideology and a means for constructing new beliefs and relationships. Philosophy, sociology, anthropology, ethnography, historical studies, each has much to offer in deconstructing and building new forms of practice in these areas of human activity.
As far as I am concerned, a truly western form of Buddhism will need to come about through radical change, yet to emerge, in order to take a more worthwhile incarnation in the West. To do that it must engage with the rich intellectual and cultural history we have here and include not just pro-positive engagement of the like we see championed by the Dalai Lama, but more devastating and destabilising critique that is essential to producing something altered and authentically capable of producing praxis and formulations of human flourishing. Wallis’ own journey has led him ever further away from Buddhism, whilst a colleague of his, Tom Pepper, has formulated a radical revaluation of Anatman in line with Marxist thought. Their sometimes militant approach has turned many off, but it is certainly the most daring and creative exploration of Buddhism currently available.
On this site, my own writings represent an attempt to carry out a post-traditional work. My deconstruction and reformulations of the eightfold path, enlightenment, meditation and non-duality each attempt to reformulate and lay Buddhist practice and ideas alongside the Western thought that inspires and motivates me. I am an amateur and as a non-academic I recognise that my writings will have limited reach but I have a great deal of fun using this site to further elaborate my own thoughts, intuitions, experience, and exploration. To me, the ruthless destruction of one’s own retreat from the immediacy of the world is electric and worth sharing.

Notes
I wrote this post due to an increasing number of followers and visitors to this site. I thought it would be helpful to define post-traditional Buddhism as I see it and make that explicit for new visitors. I hope I have been clear. Links are provided below to some of the sources mentioned above.